Spring time has quickly become one of my favorite times of the year for one simple reason – turkey season. Each year, around the first of the year, I start thinking about getting into the woods, looking for turkey sign, and straining my ears for the sound of a gobble. Last year, I was fortunate enough to bag my first Merriams gobbler after multiple seasons of trying to get it done, and as I reflected on my time in the field and the gear that I carried, I started researching on how to improve my efficiency with a shotgun. It wasn’t long before I was able to get my hands on a couple of chokes from Carlson, and after some time on the range and in the field, I was a firm believer in Carlson Choke Tubes.

Options – Carlson offers choke tubes for every situation a shotgunner will need. For the purpose of this review, Carlson provided a Remington Long Beard Choke Tube with a diameter of .660 and one of their Remington Extended Choke Tubes with a diameter of .675. If you take any time to peruse the Carlson website, you’ll quickly see that they have chokes of every shape, color, and size for all the major brands of shotguns, for any type of hunting or shooting scenario.

Lifetime Warranty – All Carlson choke tubes are backed by a lifetime warranty. 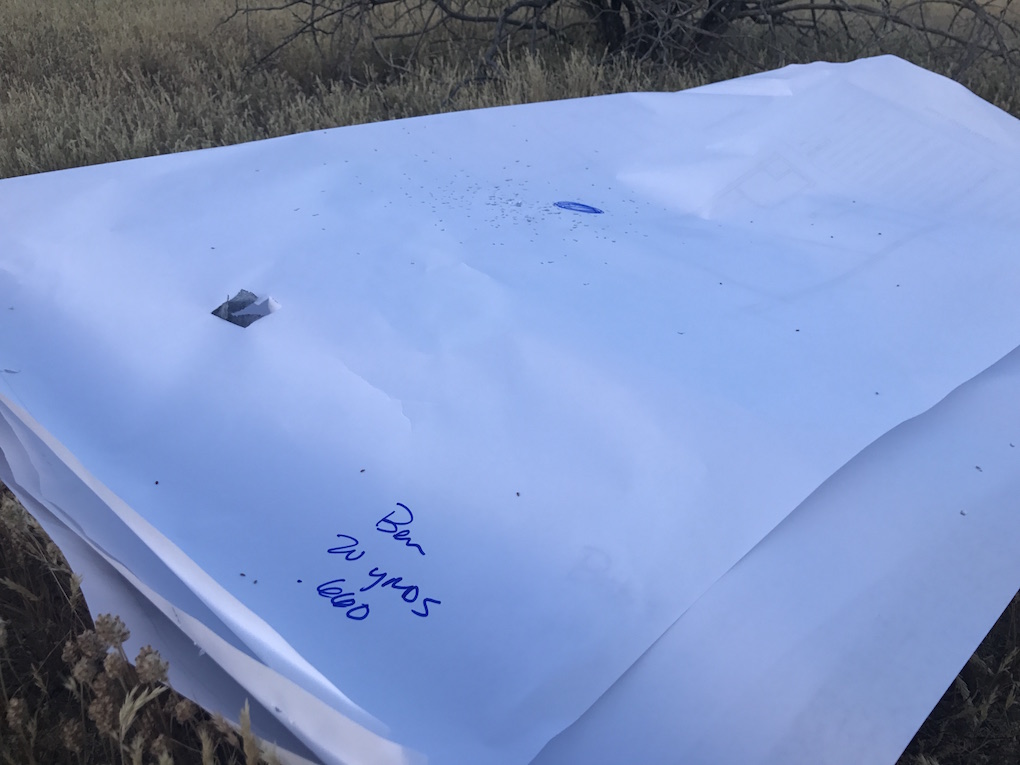 To be perfectly clear, I am not a shotgun expert. I own a couple of shotguns. I shoot them often. But when it comes to the nuances of patterning them, I always went out, shot a couple of shells at different yardages to figure out what my max range could be, and called it good. With the Carlson chokes in hand, I took a Saturday morning to run out in the desert and see how these chokes patterned.  My good hunting partner Austin and I both shoot Remingtons which was advantageous when it came time to seeing how the different chokes performed through two different shotguns. I shoot a Remington 870 Express chambered up to a 3″ shell, and Austin shoots a Remington 1100 chambered up to a 3 1/2″ shell.

We both had always just stuck with the factory standard Remington full choke (diameter of .691) that came with the shotgun for turkey season, so I started with shooting at 40 yards with the full choke. I switched chokes out and immediately was overwhelmed by how much denser the pattern was at 40 yards. I spent the next hour shooting different shells, swapping chokes between guns, and varying my distance from the target. To be clear, I’m not going to get super technical on patterning, but there was a significant increase in pattern density. After the smoke cleared, my 870 Express really liked the Long Beard XR choke with a .660 diameter shooting 3″ Winchester Long Beard XR loads.  Austin’s 1100 partnered the Carlson Extended Turkey Choke with a .675 diameter and a 3-1/2″ shell. After a morning of shotgun patterning, I had a sore shoulder and confidence in what my shotgun was capable of.

Our season unfolded with plenty of turkey hunting. Austin spent a couple days in Texas and scratched out 2 Rios. I went to Missouri with my buddy Hunter and had some success decoying in a mature 3 year old. After that, Austin and I hunted here in Arizona which resulted in a Austin shooting a beautiful Merriam’s gobbler and I followed up with a jake. Our shots during these hunts ranged from 30-55 yards.  Having success with this many turkeys and giving all the credit to choke tubes is a bit much.  But, I will say, I’ve never been more confident pulling the trigger during a hunt, then after I spent time patterning my gun and knowing how much better it performed with the Carlson choke versus the factory choke.

Made in the USA

There really is no con for getting an aftermarket choke tube. The only con I could possibly see for tightening up your choke for turkey hunting is if you hunting in a thick area and most of your shots are closer than 15 yards. At that range, a more open choke would be appropriate for the situation. I can’t stress enough. Pattern your shotgun and have confidence in what it does at different yardages.

Prognosis:  I was extremely pleased with the quality and performance of the Carlson Choke Tubes and would highly recommend them to any of my hunting buddies. Check them out.

The reviews at Arizona Wanderings are my honest opinion. These choke tubes were provided for the purpose of this review by Carlson Choke Tubes. Arizona Wanderings is not sponsored by or associated with any of the stated companies and is accepting no compensation, monetary or otherwise, in exchange for this review.  My independent status may change in the future but, as of the date of publication, no relationship other than described above has been pursued or established.

Sign up to receive email updates from Arizona Wanderings